As I approached a roundabout in the middle lane and indicating to go right (third exit), a young girl in a jelly mould car was on my inside. As I entered the roundabout the girl inside cut me up and moved to my outside (whist indicating left) as I was turning left (indicating left) off the roundabout the girl cut me up again and turned left, I honked my horn and she gave me the finger. Unfortunately for her, she hadn’t noticed the police car she also cut up on my inside, he pulled her over about 100m further on, I can only hope he threw the book at the bitch.

I was just about to go in to Waitrose when who should pull up alongside me but my mate Nick. This was fortuitous as my next port of call was going to be him anyway, I gave him his empty egg carton (perfect recycling eh) and asked if there were any eggs at the house, he said yes so off I went. Well take a look at the photos, the chickens that laid these were either massive or walking around with tears running down the side of their beaks. 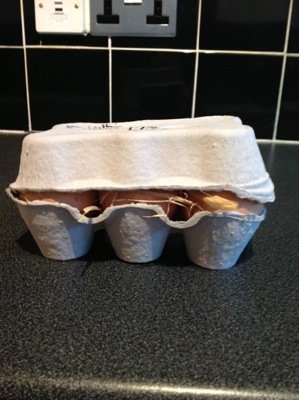 You can’t even close the box

I’ve made a Duck pâté for the weekend, unfortunately I didn’t take any photos so I’m not posting it up. Oh well I’ll just have to make it again sometime so you’ll be able to see what I did.
Cheers for now.

2 thoughts on “A funny old day”