I popped over to see Nick the other day to return an egg carton, it was a really nice afternoon so we had a bit of a chat. When I got there his three remaining chickens were sat on his front door step and seemed completely un-fazed as I reached over to knock the door, when Nick answered (Maddie was there too) the chickens tried to get indoors, maybe they weren’t happy with Millie sitting there staring at them (she just sat there eying them, well they are related to pheasants) and scenting the air. Anyway Nick said he’d check if there were any eggs, there weren’t, mind you I’m not surprised really, I think I’d be a bit reluctant to lay an egg after the last lot, they really were huge. I told Nick that I wasn’t expecting anything as I was surprised that his chickens had survived the last laying. I think Nick is going to buy some more chickens. 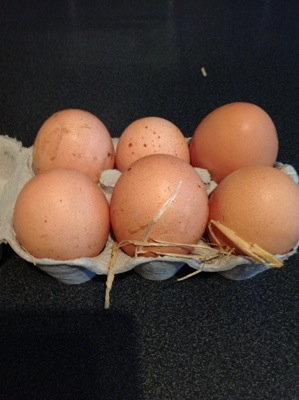 They really were huge.

Now I’ve had a few enquiries about stir frying, it seems that some of you aren’t getting good results, so I’m going to explain what I do to get good results, here we go.
The basics are quite simple really, if you follow my suggestions I can’t see how you can fail.

Make sure that all the vegetables and/or meat are going to cook at the same rate, this means cutting everything up in a way that they’ll cook evenly, ie its no good putting large chunks of onion in with small slivers of say red pepper. If you are using carrots and courgettes then you have to consider the fact that carrots are far more dense than the courgettes and therefor will need to be cut smaller to cook at a similar rate. You’ll need to experiment but it’s logical really. 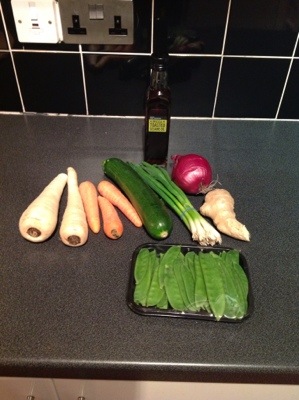 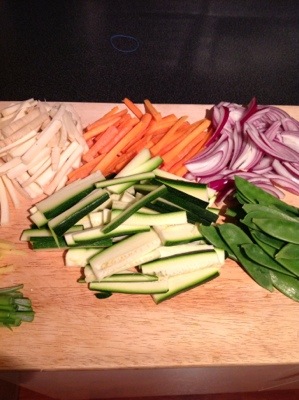 As you can see in the photos I’m using parsnips and carrots with other softer veg so when I cut them up I compensated allowing for their density (they’ll take longer to cook so they’re smaller). You’ll notice that the courgettes and onions are slightly larger.

I sometimes use ginger and spring onions (amongst others) to flavour the oil before adding the meat or veg, it is important to cut these very finely as they will only need seconds to transfer their flavours. 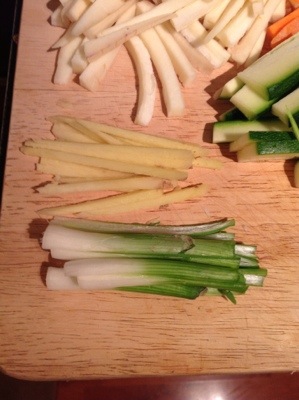 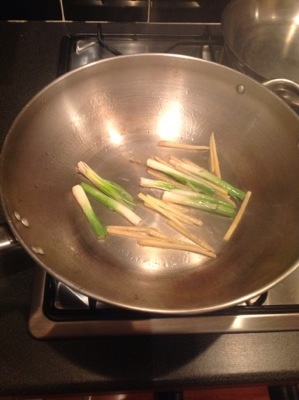 I should point out that your Wok or pan should be very hot. What I normally do is put the Wok on a very high heat and then add the oil and swish it around, this should immediately start to smoke, it’s only then that anything should be put in to cook.

When you add your chosen veg you must keep turning it over and over so that it all cooks evenly, this is very important as the veg will give up some of their water content and you want to fry not boil. Remember the idea of a stir fry is to have veg that are just cooked not soggy, the golden rule is ‘if you think it’s cooked it is’. If anything you want to slightly under cook as they’ll keep on cooking even when removed from the Wok. There’s nothing worse than a soggy stir fry. 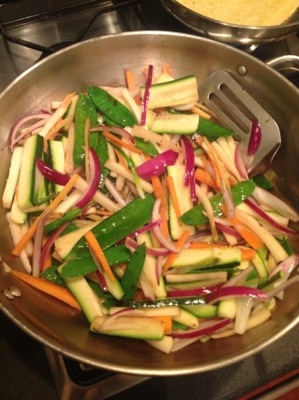 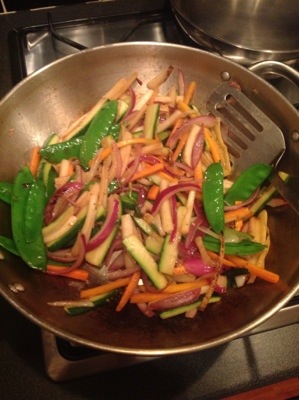 If you want to add other flavours to your stir fry (oils etc) it’s best to add them at the end just before you remove from the Wok, give it a quick swish around just to coat everything and remove. If you go to a good Chinese supermarket you can buy black beans (soya), these are normally dried, take a dessert spoon of these add a drop of water, lightly mash together and stir in at the last minute, the flavour is fantastic.

If you are using meat in your dish it must be cut small enough to cook through but not over cook, add it first or just after you’ve flavoured the oil (don’t use to much oil, a dessert spoon is normally enough).

Your local Chinese supermarket has loads of useful stuff for stir frying and is normally very inexpensive, don’t be tempted to use Sharwood’s or similar as they are crap, the real stuff is far better.

Fry on brothers and sisters. 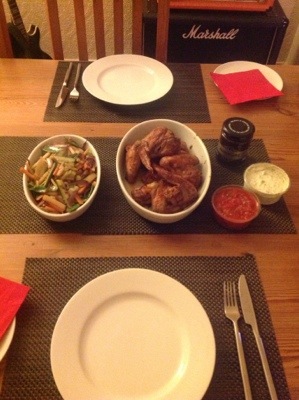