I took Millie over to Castle upon Alun for a walk yesterday and parked up by Nick’s house, as I pulled up I noticed that there were half a dozen eggs on display, yippee the hens had started laying again. I got Millie out of the back and went over to get the eggs and put my pound in the tin at which point Millie decided to have a dump in the middle of Nick’s entrance, anyway I cleared this up and walked back to the truck, popped the eggs on the seat and walked down the lane. At this moment I saw a couple (well dressed with black briefcases under they’re arms) walking up the lane towards me, as we came together they stopped and asked if I lived in the house (Nick’s house), somehow you know, don’t ask me how but you know, I said yes (thinking I’d be saving Nick from a doorstep conversation), they immediately unzipped the briefcases and out came the pamphlets and leaflets. I told them politely that I was walking the dog and didn’t have time to stop, this didn’t perturb them they started telling me about the benefits of their beliefs, so I told them that I was an atheist, this didn’t put them off either in fact it seemed to stiffen their resolve. I again said that I didn’t have time as I was going for a walk with the dog (Millie sat patiently waiting), they then asked if the lady of the house was in as they’d call on her instead, I told them that she had gone out to get the children from school (it’s the only thing I could think of in the moment), this again seemed to redouble their resolve, they thrust the pamphlets etc under my nose spouting words of redemption and the error of my ways (I’d been extremely polite up to this point), I pointed out that I was entitled to my beliefs as much as they were to theirs. They weren’t having any of this and proceeded to tell me of the fate that they saw for me, at this juncture I told them to fuck off and I walked off with Millie for our walk, I can only take so much.
When I got back Nick and Bella were waiting for me, I asked if anyone had called, which they hadn’t, I told him about my encounter, had a good laugh and arranged to go for a pint some time soon. I did comment again about the size of the eggs, he couldn’t explain it but hoped it would continue.
Take a look at the photo, the one on the left is a free range large supermarket egg the other is probably the biggest chicken egg I’ve ever seen. 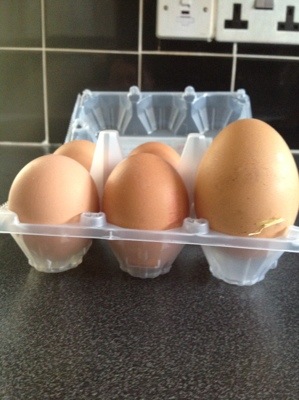 Many years ago, the very early 70’s, I knew a chap called Lal, he ran one of the first Asian food shops in Cardiff and he told me how to make a type of curry powder for a quick meal, it’s really easy and very imprecise so you can use just about anything you want in whatever compound you want or get to like.

You aren’t restricted to these but these are what he suggested, you can use any quantity of each that you like as they will all subtly alter the flavour. I tend to make up a large jar and use at my leisure. Lal also had an Indian restaurant, at the time there were only 4 or 5 in the whole of Cardiff and each one was totally individual as they reflected the regional cuisines, oh how I miss those days, the curries were so much better than the mass produced stuff the Bangladeshis serve today.
Asian supermarkets are a really good place to shop as they are generally very inexpensive and the spices and herbs tend to be much fresher than those in a Schwartz jar.

I did a lamb curry yesterday using the above, I’ll tell you what I did but please don’t be afraid of making it your way.
I used 2 lamb neck fillets cut into bite size pieces marinaded in a dessert spoon of the powder, I let this stand in the fridge for about 4 hours (longer is good), I then heated about 4 tablespoons of oil in a Wok and fried the lamb vigorously for 5 mins until they were browned all over. I then added another dessert spoon of the powder and stirred that in and enough water to just cover the lamb and brought it to a fast simmer for 3 mins and then reduced the temp to a gentle simmer for 30 to 40 mins with the lid on. 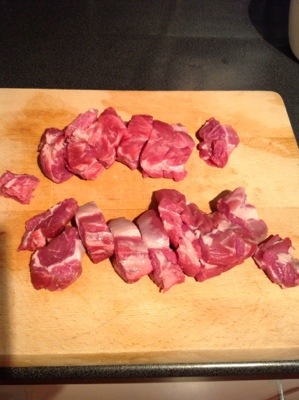 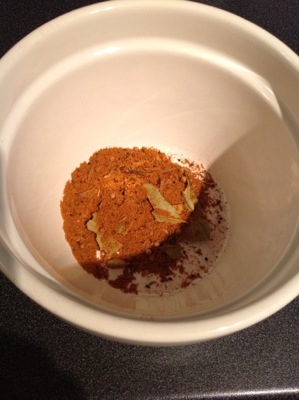 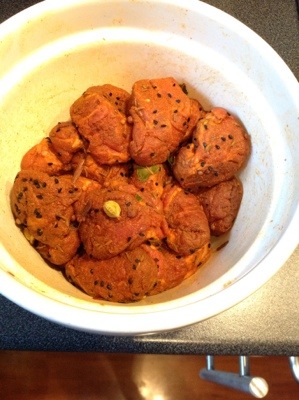 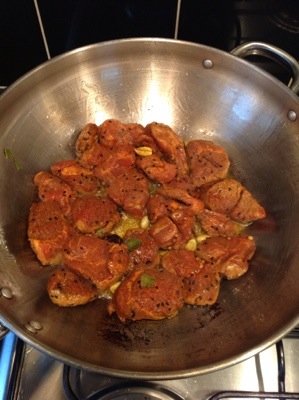 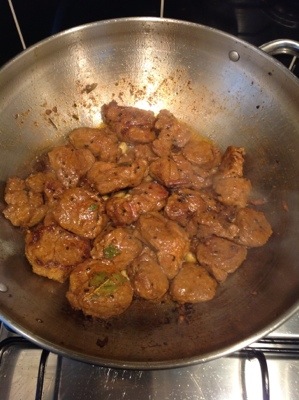 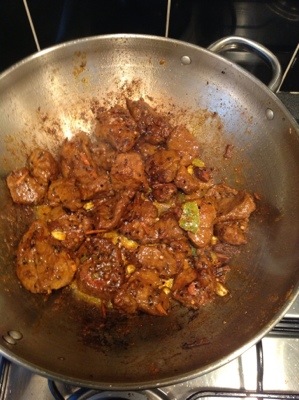 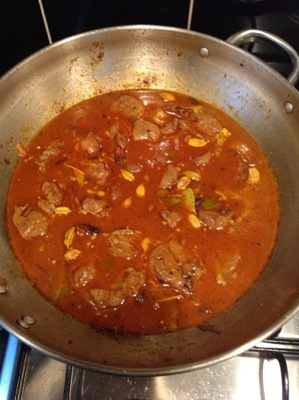 By this time the liquid will have reduced quite a bit and thickened up, I added salt at this stage. I cut up 2 red peppers into large pieces and added them in (you only want them to cook but stay slightly crunchy) for 10 mins, add 3 dessert spoons of plain yogurt, stir in and serve. I sprinkled on some chopped coriander and served with a slice of lime and boy did it taste good, quick and easy, just the ticket. 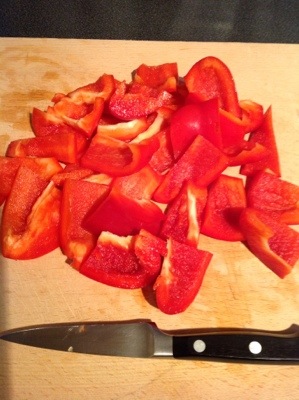 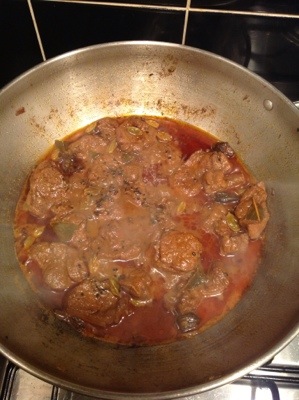 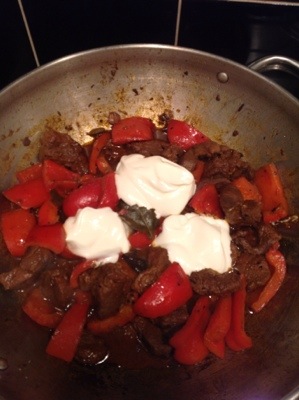 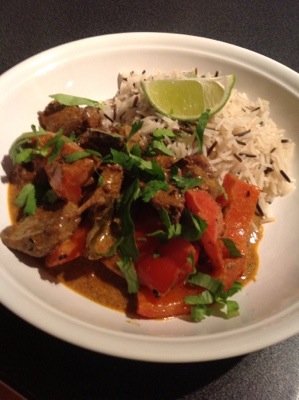 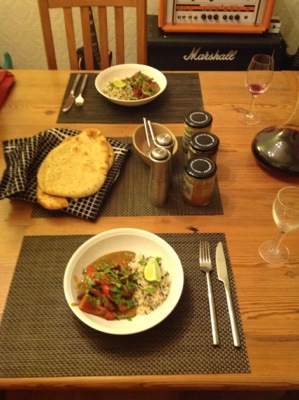 You can use chicken, beef, pork, onions, green peppers, tomatoes (instead of water and yogurt) or whatever takes your fancy, it really is easy and it’ll taste different every time. Enjoy.